If you are not currently familiar with a classification of health conditions known as autoimmune disorders, then count yourself among the few.  Described as situations in which your own immune system attacks the body it was designed to protect, autoimmune conditions are now among the most prevalently diagnosed in the world and include a wide range of labels you may already be familiar with (Multiple Sclerosis, Crohn’s Disease, Rheumatoid Arthritis, and Type 1 Diabetes best known among the nearly one hundred identified to date).

In the modern landscape of specialized healthcare, highlighted consistently by a failure to recognize the interconnectivity of everything that happens in the human body, conditions thought to be autoimmune in origin have continually baffled traditional thinkers with mindsets rooted in treating symptoms and disease via methods that produce the opposite effects.  In the case of autoimmune disorders, for instance, the response to an attack on the body by the immune system is to medicinally suppress the immune system, a “pick your poison” approach that unsurprisingly has massive long-term consequences in its own right and that fundamentally fails to address the most obvious question – why is the immune system attacking the body? – as if the question is inherently impossible to answer.  Within that traditional bubble, there is little to find but despair for sufferers of autoimmune conditions.

With medical spending on autoimmune diagnoses approaching the level spent on heart disease, it is time to get a firm handle on what goes on in the body to cause such fundamentally unnatural reactions and to apply a more logical approach to combating them.

So, logically, what are the most common reasons why the immune system would attack the body?

Human physiology 101 – the basics of how the human body works – teaches that your immune system is controlled by the nerve system, the hubs of which are the brain and the brainstem.  Like our military defenses, there are immune stations positioned throughout the body that are directly linked to the brain via the nerves; in a constant game of Battleship throughout your life, the brain coordinates strikes on foreign invaders deemed threatening by relaying tactical instructions across the nerves.  The goal is to protect, and that protection is dependent upon proper communication between admiral (the brain) and fleet (immune system).  Disrupted communication in any circumstance will yield undesirable outcomes, but especially so in the human body when the immune system’s combat instructions from the brain are interfered with.  In part, autoimmune conditions result from this distorted communication; if the brain commands an attack on an infection in quadrant B6, but an inaccurate coordinate comes through the nerve network – E6 the spinal cord (MS), D6 the digestive tract (Crohn’s), P6 the pancreas (T1 Diabetes), or G6 the joints (RA) – then something has happened that fundamentally would not have happened if there had been proper communication.

The brainstem is the cell tower of the body’s nerve network, responsible for the transmission of the signals from the brain along the nerves to the immune stations.  Thus, proper attention needs to be paid to the brainstem when evaluating an autoimmune disorder’s cause.  The brainstem is the largest part of the spinal cord and it rests in the rings of the vertebrae that are the smallest part of the spinal column.  It is an area where spinal cord compression can most easily occur and most commonly go undetected.  The Journal of Neurology published a study that showed, using functional MRI, spinal cord compression at the brainstem level in individuals that had undergone little more than common physical traumas.  Such traumas lead to misalignment of the delicate 1st cervical bone, one of the more vulnerable bones in the body to injury since it is held in place only by muscle.  Correction of this misalignment is of paramount importance to ensuring the restoration of proper communication between the brain and the immune system through the brainstem. 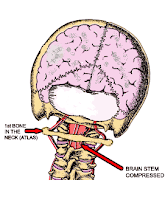 Once the proper functioning of the nerve system that controls the immune system has been confirmed, the next logical culprit for autoimmune conditions is the steady bombardment of the body with chemicals from foods, beverages, medications, air pollution, and the like.  If the previous discussion of how neurology affects physiology is akin to a washing machine not suitably working because of an electrical wiring issue, then shifting the conversation to nutritional factors puts the focus on what the expectation would be for our laundry if we filled the washing machine with juice or degreaser or even dish soap instead of the detergent that the machine requires.

Your body uses food to make over 200 billion new cells per day.  Back to physiology 101, your digestive system strips down what you put into your body, takes what it needs in the immediacy, stores some of what it needs for later, and sends the rest down the pipe to be eliminated; note that, when it comes to storage, there is also a category for questionable material comparable to your own “keep and decide later” pile when spring-cleaning.  Simply put, the better your nutrition, the stronger material you provide your body to make new cells and to keep the entire assembly line, if you will, running smoothly.  Unfortunately, the proliferation of genetically-modified food (GMOs), which makes up the vast majority of our standard food supply at present time, along with all the sodas, energy drinks, and other chemical-packed beverages have given our bodies an incredible amount of lousy materials to sort through; add in the American dependency on medications (7 out of 10 are on at least one prescription drug) and the aggressive childhood vaccine schedule and we collectively consume so many chemicals that it has become challenging for our bodies to thrive.  An individual human body is smarter than everyone reading this combined, but it has limitations.

Dr. Chad McIntyre owns and operates the Triad Upper Cervical Clinic in Kernersville.  Specializing in Upper Cervical Care, his office emphasizes a proactive, goal-oriented approach to health rooted in strong patient education.  If you would like to learn more about Upper Cervical Care, visit www.triaduppercervical.com or call 336-992-2536 to schedule a consultation.