The Primary Reason Why 90% of People Are In Pain...And How To Fix It

Pain is an aggravating and draining experience, affecting our jobs, personal lives, and general quality of life.  It is also increasingly prevalent; 50% of the population suffers from a headache-related condition; 30% suffers from neck pain, with over half likely to experience recurring episodes; low back pain is the second most common cause of disability in the United States (neck pain is fourth) and accounts for $100 billion in lost wages per year due to decreased productivity.

Perhaps the most frustrating things about being in pain are the ineffectiveness of commonly prescribed treatments and not understanding the cause, with conflicting and numerous opinions making it all seem so complicated.

Well, what if it was really not that complicated?  What if a big part of the explanation was as simple as, “You are showing signs of physical breakdown because the foundation of your body has shifted, forcing every bone and muscle in your structural frame to compensate”?  Could it possibly be that simple?

That it is absolutely possible for it to be that simple is one of the best kept secrets in healthcare.

You see, your body is not unlike your home in that its foundation has to be level in order for it to maintain its structural integrity.  If your home’s foundation shifts, then at some point – be it months or years later – noticeable adverse reactions will develop; the same thing happens in the body, but a quick review of Anatomy 101 reminds us that the body is structurally designed from the top down, not the ground up like in a home.

While developing in-utero, the first bones that form are the skull and the upper cervical vertebrae in the neck to protect the two most important parts of your body: the brain and the brainstem; such is the foundation upon which the rest of your anatomy is built.  After development is completed, the balance of the head and neck becomes crucial to your body’s ability to maintain and sustain itself physically; to recover from the stress of day-to-day life, to heal following vigorous activity or exercise, etc.

Unfortunately, nine out of ten people have lost their foundational stability, most frequently on account of head and neck injuries from birth to the late teenage years, when trauma is far more common and the body is still developing.  That header off the top bunk, tumble down the steps, fall off the bike or backyard tree, teenage sports injury or auto accident – one or more of these things happen to everyone – can actually become very clinically relevant.

When your head and upper neck are taken out of their normal state of alignment due to injury, the first cervical vertebra no longer positions squarely under the head, and a chain reaction occurs (through your body’s righting reflex) that prompts your bones and muscles from head to toe into an adapted physical state in order to return your head to as balanced a position as possible; the body uses the level positioning of your eyes, along with the fluid inside of your ears, to establish equilibrium, so when your head and upper neck are off balance, failure to adapt would keep you consistently dizziness or disoriented.

In the adapted state, one shoulder often shifts up higher than the other and one hip draws higher than the other, dragging the attached leg up and giving the appearance of that leg being shorter than the other, frequently by a quarter to a half inch or more; the head also tends to jut forward over the shoulders, biomechanically disrupting the normal structural support system that helps carry the weight of your body on its structural frame.  This shifting causes muscles that run along the left and right sides of your body, as well as the muscles positioned in the front and the back, to pull against one another instead of working in tandem as they are designed; persistent muscle strain on the head, neck, shoulders, back, and hips can cause pain in various areas of your body as early in life as youth. 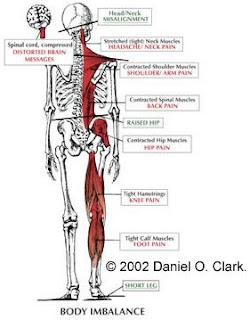 Uncorrected body imbalance creates on-going structural stress and has a very negative long term effect.  Though incredibly resilient by nature and capable of reorganizing well enough during the early phase of foundational adaptation to avoid much more than minimal warning signs like pain or other symptoms, your body will break down if the head and upper neck alignment is never restored.  Foundational shifts result in the loss of natural support curves in the spine (i.e. straight spines), causing the body’s weight to stack on the discs in between each vertebra in the short-term and, consequently, premature degenerative disc disease, disc bulging and/or herniation, and even a closing down of spinal nerve canals (stenosis) in the long-term; it also causes unequal weight distribution across each hip and leg by up to twenty pounds, resulting in degenerative joint disease in the hips/knees/ankles/feet.  Just as driving your car with the front end out of alignment causes premature tire wear, long-term body imbalance causes your body to age faster.

Logical as all of the above may be, that you may never have been made aware of it before speaks to the primary flaw in our health system; we have collectively become so enamored with symptom management that a basic, extremely common cause of pain goes chronically overlooked.  We all experience trauma and, thus, are all susceptible to foundational misalignment, but when head/neck balance is restored, immediately your body can begin to re-adapt, your innate self-healing process can more effectively resume, your muscles can begin to relax, pain can start reducing, the degenerative process can be curbed, and even disc bulges and herniations can be reabsorbed.  It really can be that simple.

Dr. Chad McIntyre owns and operates the Triad Upper Cervical Clinic in Kernersville.  Specializing in Upper Cervical Care, his office emphasizes a proactive, goal-oriented approach to health rooted in strong patient education.  If you would like to learn more about Upper Cervical Care, visit www.triaduppercervical.com or call 336-992-2536 to schedule a consultation.
Posted by Dr Chad at 11:35 AM 1 comment:

Everything is energy. Our physical bodies – that which we can see and touch – are comprised of atoms that are constantly in motion. The fact that they are more densely packed and are moving more slowly than, say, the atoms of water or air is what gives them their tangible physicality. Science now proves that our body actually extends beyond what we can see and touch.

This energy body, or biofield (called the ‘aura’ in more new age terms), is what we recognize when someone steps into our ‘personal space,’ when someone is too close for comfort, when we feel someone looking at us, when we step into a room where the tension can be ‘cut with a knife.’ This energy can be measured in hertz by scientists, and can be felt or seen by some people.

Because we are holistic beings – physical, mental, emotional, spiritual, energetic – healing in one aspect can heal the whole. I choose to work on the energetic level to affect change in all other levels. By working with the energy body and raising our vibration, we bring about an authentic balance that holds space for whatever healing or ‘wholing’ is needed for each individual.

My path to this work has been lifelong and meandering, but persistent and seemingly inevitable. As a child, I would give family and friends shoulder and foot rubs, and it was satisfying to see how good it made them feel. On some level, I determined then that I would be of healing service in the world.

In my 20s, I became a licensed massage therapist. From my perspective, the opportunity to professionally touch my clients was simply an excuse to let the ‘real’ healing happen, to be a vessel for healing energy. Since then, I have studied, practiced, and been certified in numerous techniques and modalities.

At the same time, I have been committed to my own healing and spiritual growth. Like everybody else, I’ve had my own physical issues and emotional wounds to deal with, and have explored myriad healing methods. So not only am I able to share my knowledge and training with my clients, they also receive the benefit of my personal healing experience.

I am committed to sharing with my clients with the means to facilitate their own innate healing/wholing process. My long-term goal is to divest myself of all clients, to send them on their way with their own toolbox full of self-healing techniques and exercises so that they are empowered to take care of themselves and their loved ones.
I invite you to order my free e-book, “Conscious Life Creation: 10 Easy Steps to Raise Your Vibration and Begin Living the Life You Were Born to Live” ( http://www.betzmckeown.com/a-gift) and take the first steps towards your inherent wholeness.
Posted by Dr Chad at 6:34 AM No comments: